We provide an archive of release notes for your historical reference.

Added support for additional TYPE options for the CREATE EXTERNAL TABLE command, to allow configuration for ingesting different CSV file formats. Some of these options may be available in previous versions.

In the SQL workspace, you can now select a portion of an error message to copy. 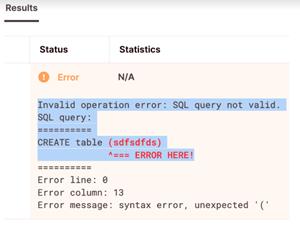 A new help button allows you to contact Support directly through a support form and access release notes and documentation on the web.

You can now use a keyboard shortcut to create a new script in the SQL workspace (Windows – Ctrl+Alt+N, Mac – Cmd-Opt-N).

We’ve updated the databases page for a smoother experience:

We’ve updated the way engines and databases are created and edited, for a smoother experience:

The wonderful point in time in which a new product decides to start sharing release notes.